A couple of things have been consistent about my experience so far at this 42nd PCA General Assembly, I’ve had breakfast every morning at a Starbucks inside and upscale office building lobby near my hotel. I carry my personal cup with a custom sleeve that specifies my drink of choice: tall vanilla latte. 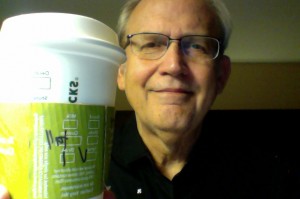 Secondly, I’ve been able to carve out a few minutes of solitude with God and his Word to keep my heart in balance in the midst of very hectic days. Third, I’ve done plenty of walking!

Outgoing Moderator Bruce Terrell presented on behalf of the Cooperative Ministries Committee, which is a committee made up of the assembly’s last five moderators. This seems to be a forward-looking group to identify what challenges are facing the denomination. According to their report, the Top 5 issues facing the PCA are the role of women in the PCA, homosexuality and related issues, the rising generation of leaders (how to make room for developing leaders with all of us older guys around!), making the General Assembly more attractive to younger pastors and all ruling elders, and practicing diversity in all areas of church life. The CMC has appointed subcommittee for each of these areas that will report back to them.So, what was Wednesday like? I can’t exactly put a theme on it, but it was probably a day of looking back. The morning session of the assembly was on the PCA Past, Present, and Future. This was a panel conversation by Stated Clerk Paul Taylor, newly elected Moderator Bryan Chapell and Birmingham, AL, church planter Murray Lee. They talked about effectiveness, faithfulness to Scripture and relevance in a trendy world. It reminded me of a comment by the late Rev. John Stott of the Church of England who talked about relevance to contemporary man without being relativistic.

Our Stated Clerk also released stats for last year and rather than list them here I’m going to refer you to ByFaith magazines website for those numbers: http://byfaithonline.com/stated-clerk-releases-2013-stats-on-the-pca/

We also heard from a variety of reformed denominations that share our theology and values. This was under the umbrella of the Committee of Commissioners on Interchurch Relations and Fraternal Greetings and was chaired by Atlanta Westside Presbyterian Church pastor Walter Henegar. The greetings came from Mexico, Canada and across the US. These greetings include reports on progress within those denominations and an occasional inside theological jokes and barbs. Not sure why these are necessary.

During the lunch recess, I enjoyed a great meal sponsored by Wellspring Group to introduce commissioners to the process of heart-deep living and discipleship that Wellspring trains church leaders to engage in. There are lots of sponsored luncheons during the GA. Along with hearing from WG Executive Director Larry Bolden, we hear testimonials from Oak Mtn. PCA, Birmingham, founding pastor Bob Flayhart, church planter out of Rock Creek Church on Lookout Mtn. Hutch Garmany and adult ministries pastor from Oak Mtn. Greg Poole. As someone who has benefited from the Wellspring Group process, I was reminded again of the depth and breadth of God’s love and how he longs for us to be live from whole hearts of freedom and hope.

From there I went to what was for me the most dreaded and sad experiences of my participation in this year’s GA. This was the report of a study committee that came about in 2011 on the topic of so-called Insider Movements. Since the 39th General Assembly, this committee has reported on their analysis and critique of many Christians who have no affiliation with the PCA. Much of the analysis has been around Bible translation work for Muslim cultures and whether Muslims who become followers of Jesus can remain in their Muslim world. Hundreds and hundreds of pages have been written by this committee and ultimately for the past two years they have produced both a committee (sic; majority) report and a minority report with a critique of the minority report. And after much parliamentarian wrangling, an overwhelming majority voted in favor of the committee’s report that essentially condemns insider movements and some particular areas of Bible translation. I’ll refer you to the GA’s website for looking into this report if you’d like. Here’s the link: http://www.pcaac.org/general-assembly/commissioners/insider-movements/ This page says that this report hasn’t been acted upon, but the page hasn’t been updated. It was acted upon today.

Many of my personal views on this topic have to do with my personal experience with insiders in Muslim Bangladesh who have been baptized as followers of Jesus the Messiah and the challenge of producing an authentic translation of scripture that is based in Muslim culture rather than Hindu culture. One of the scriptures I look to for guidance is Mark 9: 38 “Teacher,” said John, “we saw someone driving out demons in your name and we told him to stop, because he was not one of us.” 39 “Do not stop him,” Jesus said. “For no one who does a miracle in my name can in the next moment say anything bad about me, 40 for whoever is not against us is for us.

The rest of the session this afternoon was reports from different committees and agencies of the denomination. Tomorrow we’ll get into the Overtures Committee report led by my friend and fellow Intown elder Jim Wert.

I had a memorable dinner with some of the Wellspring Group team who are enjoying a great increase in traffic at their booth and lots of personal meetings for Executive Director Larry Bolden. How did I experience the dinner? Relaxing, celebratory and vision expanding.

Fun conversations of the day with: Troy Duble, VP of Advancement at Covenant College, Bruce Terrell, Matt Cadora and Peter Wang of Grace Redeemer of Teaneck, NJ with John Purcell. This morning I said farewell to my son Justin who returned to Dallas today. It was great to spend a couple of days with him in between all of this. He’s an exceptional young man.

I told you it was a hodge-podge day.

One seeking to live from his heart as a follower of Jesus. Son, husband, father, friend. Writer, marketing and fundraising strategist. Veteran of corporate, agency, and high impact organizations. View all posts by Jimmy Locklear