I’ve been reading, from time to time, a diary that Henri Nouwen kept while he spent several months living in a monastery in upstate New York. The book is titled “The Genesee Diary” and it is not unlike other journals and diaries that Henri published or that were published after his passing on to glory. Like many of us, our deepest questions are sometimes answered in the most common of readings and experiences. It seems that the Holy Spirit enlightens our hearts and minds when we are not expecting it. That is, if we have trained our hearts to listen or are open to hearing. 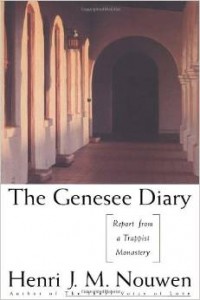 So, this was on an ordinary Tuesday that the Spirit spoke to Henri as he had been reflecting on the writings of the desert fathers from the 4th Century and, no doubt, examining his temporary life in a monastic order. His insight or “revelation received” gave me an answer to a larger practical, yet theological question this morning. Perhaps it will provide some guidance to you as well.

“In the writings of the desert fathers there is much emphasis on renunciation and detachment. we have to renounce the world, detach ourselves from our possessions, family, friends, own will, and any form of self-content so that all our thoughts and feelings may become free for the Lord. I find this very hard to realize. I keep thinking about distracting things and wonder if I ever will be “empty for God.” Yesterday and today the idea occurred to me that instead of excluding I could include all my thoughts, ideas, plans, projects, worries, and concerns and make them into prayer. Instead of directing my attention only to God, I might direct my attention to all my attachments and lead them into the all-embracing arms of God. When this idea grew in me, I experienced a new freedom and felt a great open space where I could invite all those I love and pray that God touch them with his love.”

Praying for you today that God would touch you with his love.

I’ve promoted the books of Dr. David Benner before. Like many of my favorite writers, David has that great combination of training in psychology and spirituality. Thus, his books often integrate the two disciplines into more fully developed frameworks for our inner lives and how we can apply our beliefs in our daily activities. [David’s website]

Letting go is an important spiritual practice, but it is counterintuitive because the default posture for most of us is to clutch, not to release. If we are to be truly present to ourselves, we must let go of the preoccupations that fill us up and keep us from stillness and presence. To be fully present means that I must be temporarily absent to the things I normally carry with me in consciousness. They are the noises that drawn out inner silence, the distractions that keep me from a deep presence to my self and my world. For when I am caught in the rut of my ordinary inner self-chatter, all I am present to is this background static.

This ties in beautifully with what I’ve been learning over the past few years about “praying without ceasing” and the inner dialogue versus the monologue that I so often have with myself. The “background static” that Dr. Benner refers to is the re-hashing of our past that tends to dominate our thinking. Or, for some, it is the anticipation and rehearsing for our future performances that pre-occupy our minds so that we can’t hear the voice of the Holy Spirit who indwells us and speaks comfort and wisdom into our daily activity.

It also meshes with Jesus’ teaching on “go and sin no more” and the idea of “fast repentance” that I’ve been mulling over for a while. I’ll be posting more on these themes soon.

If you are a person of faith or a person of prayer, you must’ve asked that question in your conscious or unconscious mind at some point. And if you are a person who reads the Bible or listens to others read it in a house of worship or in your own house, you may wonder what should you expect to happen after you read a few or several sentences in one of the books of the Bible.

Just this morning I read Psalm 106:1-5 in the October 21st liturgy entry in “Common Prayer: A Liturgy for Ordinary Radicals” (Claiborne, Wilson-Hartgrove & Okoro) and I was struck by what I was reading. Even more, I was thinking that these verses were a prayer or song directed to God when they were originally written, and that I had a choice in my own heart as to whether this was my prayer, my spoken words to the Holy Spirit. Or, I could just mindlessly and heartlessly read them and go ahead and finish the whole liturgy for the day. Do you ever do that: Read something of profound value without any engagement whatsoever? Do we expect that through some mystical operation we will derive some benefit from silently mouthing the words of Scripture? Thus, the bigger question: What do we expect God to do?

First and foremost, we should expect God to respond. At the most basic level, it is fair to expect engagement from God if we have engaged with the words we are saying/thinking that are addressed to our Creator. Now, do you wait for a response?

Let’s look at the prayers that I read today. This is verse 4: Lord, remember me when you show favor to your people. Help me when you save them.

So, if you said that to a friend, a parent or a sibling what would you expect in response? Maybe a quick, “OK,” or perhaps a “got you covered!” would be fine or perhaps a more in-depth, “You are one of mine, so, yes I’m going to save you when I save all of my children.”

Would that be a fair expectation? Does that seem too casual for God?

Or would any of those sound like the resurrected Jesus when he said, “Put your finger here (in my side),” to Thomas in response to his indirect request for concrete evidence that the same Jesus who was crucified was now alive.

Don’t you think it is fair to expect that statements, conversations and requests that are recorded for our benefit in the Bible should be actionable for us today?

And Thomas wasn’t even in the same place with Jesus when he made his request. And it was a random request that didn’t follow any liturgical framework or Jewish tradition. [the painting was by Michelangelo Merisi Caravaggio whose works I have used before]

And Thomas’ response to Jesus’ response was worship. Not surprising either. So, I would suggest to you to try expecting God to respond when your words are heartfelt and expressive of your true desires. Listen for his reply. Give some time to the conversation as you would anyone else in your life. Expect God to do something. I really don’t think you’ll be disappointed.

Look for “Part 2: Offer a new idea” at this same site next week.